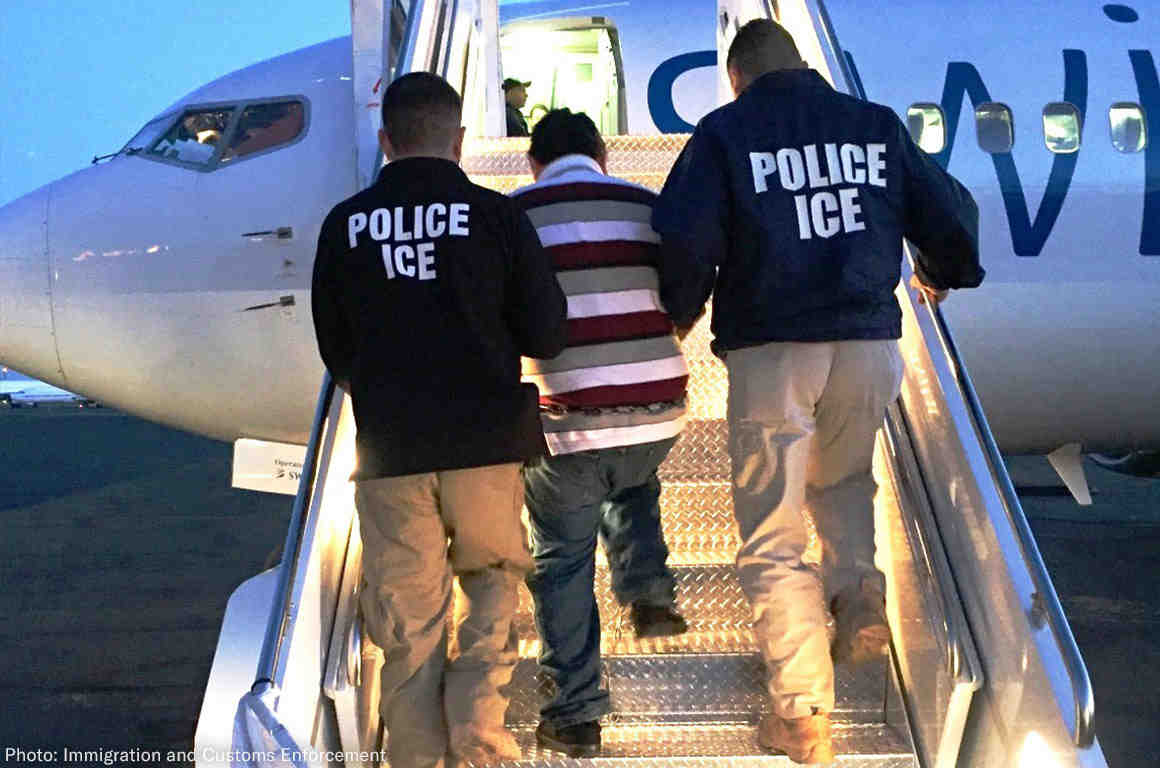 The Immigration Laws and Regulations, unfortunately, do not contain any statutes of limitations from deportation and removal. This is because these laws are considered civil, not criminal, so that an individual could be taken by surprise, detained and placed in court proceedings at any time. This could be for an old or new conviction or arrest, once airline travel within or without of the United States or a minor traffic offense triggers investigation into  the  case  history  of  an  alien. Investigations can be triggered  by  a  law enforcement official or federal officer.

Airport officials may go so far as to detain individuals in these situations.  When an alien is detained, has an action pending before the administrative appeals body (the “Board of Immigration Appeals” or “BIA”), and is in “danger” of being immediately deported or removed, the alien, or the  alien’s  attorney  or  representative  may  request  an  emergency  stay  of deportation/removal from the BIA. Once the courts have received the stay request, they are faced with an emergency situation in which the stay request must be given immediate attention and priority over other work.

Aliens  in  the  Custody  of  the  Department  of  Homeland  Security  or  U.S. Citizenship  and Immigration Services

Jurisdiction of the Board of Immigration Appeals

Procedures To Stay Removal and Deportation

An appeal or a motion must be properly filed with the Clerk’s Office at the BIA. The BIA will accept filings in person only at the window of the Office of the Clerk, on the 13th Floor of Building 3 at EOIR’s Skyline Office Complex in Falls Church, VA. This applies to the USCIS as well as the public.

A stay request can be submitted to the BIA in writing or can be requested telephonically through a BIA secretary.

As noted above, when an alien is detained, has an action pending before the Board of Immigration Appeals (BIA), and is in “danger” of being immediately deported or removed, the alien, or the alien’s attorney or representative, may request a stay of deportation / removal from the BIA.

Faxed stay requests will be accepted only if necessary, i.e. because the alien’s scheduled deportation does not allow enough time for the stay request to be delivered by other means; there is an underlying motion pending at the BIA; the BIA clerk asks that the request be sent by fax.

Once an alien in proceedings is found to be removable, he or she, if eligible, may request one or more types of discretionary relief.  This section describes some types of discretionary relief that are available during a hearing; administrative  relief  and  judicial  review  after  a  hearing  is  completed  are discussed below.  The alien has the burden of proving that he or she is eligible for relief under the law, and usually that he or she deserves such relief as an exercise of discretion.

Cancellation of Removal for Long Term Residents and Non-Residents of the U.S.

Requirements for Obtaining Cancellation of Removal for Lawful Permanent Residents:

Must be a lawful permanent resident for at least 5 years; continuously resided in the United States for at least 7 years after having been lawfully admitted; and never convicted of an “aggravated felony”.

Requirements  for  Obtaining  Cancellation  of  Removal  for  Non-permanent Residents:

Must be continuously present for at least 10 years; a person of good moral character during that time; not convicted of an offense that would make him or her removable; and demonstrate that removal would result in exceptional and
extremely unusual hardship to his or her immediate family members (limited to the alien’s spouse, parent, or child) who are either U.S. citizens or lawful permanent residents.

It is important to note that different standards are used in determining eligibility for victims of domestic violence, crime victims, and victims of trafficking of persons.

Political Asylum, Withholding of Removal, and Violence Against Women Relief

Asylum – An asylum applicant must demonstrate to the asylum officer or Immigration Judge an inability to return to his or her home country because of past persecution or a well-founded fear of future persecution based upon his or her race, religion, nationality, membership in a particular social group, or political opinion. However,  an  alien  may  be  ineligible  for  asylum  under  certain circumstances, including having failed to file an asylum application within an alien’s first year of arrival in the United States, being convicted of an aggravated felony, or having been found to be a danger to national security, although exceptions apply. Similar or related forms of relief are Withholding of Removal and applications under the United Nations Convention Against Torture and the Violence Against Women Act.

Adjustment of Status – This form of discretionary relief is available to change and upgrade an alien’s status from a non-immigrant to that of a lawful permanent resident, or the first step towards U.S. Citizenship (the ultimate goal of immigrants in many cases). Aliens who have been previously admitted with a visa or visa waiver into the United States can apply to the government for adjustment of status, while aliens in removal proceedings apply before an Immigration Judge.  Several conditions must be met, including that the alien is admissible  for  permanent  residence  and  an  immigrant  visa  is  immediately available at the time of application.  This availability can be determined by consulting the U.S. Visa Bulletin.  Aliens who qualify for adjustment of status are often petitioned for by a spouse, another qualifying family member, or an employer.  Certain individuals, including criminals and aliens who fail to appear for proceedings or fail to depart after a grant of voluntary departure, and those who were ordered removed and those who entered without a visa or visa waiver may be ineligible for adjustment of status. In some cases, however, a motion to reopen or reconsider, or another discretionary application, may be filed to cure a previously issued order of deportation or removal, depending on the factual circumstances of a case.  In instances such as this, filing an application is not simply a matter of filling out forms – it may be perilous and therefore competent counsel should be consulted.

Stay of Removal – A stay of removal stops the deportation of an individual and prevents the government from executing an order of removal, deportation, or exclusion.  Depending on the situation, a stay of removal may be automatic or discretionary.  An alien is entitled to an automatic stay of removal during the time allowed to file an appeal (unless a waiver of the right to appeal is filed), while an appeal is pending before the BIA, or while a case is before the BIA by way of certification.  Except in cases involving in absentia orders, filing a motion to reopen or reconsider will not stay the execution of any decision made in a case.

Similarly, filing a petition for review in Federal court also does not result in an automatic stay of a removal order.  Thus, a removal order can proceed unless the alien applies for and is granted a stay of execution as a discretionary form of relief by the BIA, Immigration Judge, DHS, or a Federal court.  Such a stay is temporary and is often coupled with a written motion to reopen or reconsider filed with the Immigration Court, the BIA, or an appeal to a Federal Circuit Court.

Time is of the essence in these proceedings and again, competent counsel should be contacted immediately for assistance.

In deciding cases, the BIA can dismiss or sustain the appeal, remand the case to the deciding Immigration Judge, or, in rare cases, refer the case to the Attorney General for a decision.  A precedent decision by the BIA is binding on DHS and Immigration Judges throughout the country unless the Attorney General modifies or overrules the decision.  With respect to the filing deadline, the appeal of an Immigration Judge’s decision must be received by 30 calendar days from the date it was issued by the court.     Competent delivery services such as fed ex or overnight mail should be used to ensure timely filing of the appeal. Courier companies in D.C. or Virginia can be contacted for a high fee for even same day delivery.  The guidelines are very strict and careful attention must be paid to filing dates.

Judicial Review – The Immigration and Nationality Act confers Federal courts jurisdiction over certain decisions appealed from the BIA.  However, subsequent laws have substantially restricted judicial review of removal orders. An alien has 30 days from the date of a final removal decision to file a judicial appeal, which is generally filed with the Court of Appeals.  The procedures and
applicability of judicial review in immigration cases are complex and governed by a number of court decisions and interpretations that, in many circumstances, are not clearly resolved.  For an understanding of how judicial review might apply in a specific case, qualified legal counsel should be consulted. It should be noted that the mere filing of a federal appeal may not automatically stay or stop the removal of an alien.  Once that alien is physically deported, though, counsel can also be consulted to determine whether any waivers or other remedies exist which might allow the reentry of that alien for legally sufficient reasons, which are affected by jurisdiction.

A foreigner’s marriage to a US citizen or having US born children, does not automatically guarantee that INS will not try to remove an individual from the US, however, in many cases, these relationships, once proven to be valid, are helpful and assist in a positive discretionary determination by the government. There is a presumption that the marriage is a sham, entered into for purposes of obtaining the “green card,” if it takes place after the removal proceedings have commenced.

An immigration practitioner can advise you of the consequences of your intended action (divorce, change of employers, concurrent employment, etc.), or how to achieve your goal without negatively affecting your immigration status. An ounce of prevention is definitely worth a pound of cure in this case. Get help. The stakes  involved  in  a  removal  hearing  are  very  high,  involving  the  risk  of separation from your family and your community, of loss of your job, and of loss of your way of life. While you have every right to represent yourself before the government, you will benefit greatly from the guidance of a Board Certified Immigration Attorney who is experienced in deportation defense.