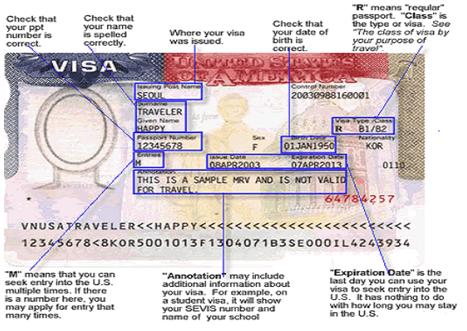 An Overview of a US Visa

This article provides a basic overview for tourist and business visitors; some provisions of NAFTA affecting Canadian and Mexican nationals, the visa waiver program available to mainly European nationals; H-1B employment visas available to a limited number of degree-holding professionals; L-1 visas for intra-company transferees from overseas offices; and some other special visas.

In all cases, an initial distinction must be made between the visa issuance process abroad and entry to the U.S.  There are two steps to entering the United States as a foreign national coming from most countries for which the United States requires a visa, beginning with the visa application and issuance at the consulate or U.S. embassy abroad, and the subsequent entry into to the U.S. and clearance and admission by the Department of Homeland Security at the border or airport.

An applicant for a B-1 temporary business visit or B-2 temporary tourist visa must first prove to the consular official at a foreign embassy or consulate that he has a residence in a foreign country which he has no intention of abandoning, and that he intends to visit the U.S. only temporarily for business or pleasure. B-visa applicants must submit Forms DS 156 and 157, a passport preferably valid for at least six months after the intended period of stay in the U.S., required photos, and any required fees.  Furthermore, B-visa applicants must demonstrate that they have permanent employment, meaningful business or financial connections, and close family ties or social or cultural associations that indicate a strong inducement to return to the country of origin.  Lastly, B-visa applicants must show adequate funds to avoid unlawful employment.

Specifically, B-1 eligibility is determined by whether an individual is coming to engage in business activities as opposed to engaging in local employment for hire. Depending on visa reciprocity schedules and agreements between the U.S. and the country of nationality, the visa can be issued for up to ten years with multiple entries to the U.S. possible. (The most up-to-date visa  information  for  each  U.S.  Embassy  and  Consulate  is  located  on  the  Internet  at http://usembassy.state.gov/.)  Once the visa is issued, the foreign national becomes subject to the “U.S. Visit” program and will be fingerprinted upon entering the U.S. by a border official.  That official has discretion to admit or deny admission to the foreign visa-holding national, who can be granted up to 6 months admission if entering for pleasure and up to 1 year if entering for business, with possible extensions.

Some uses of the B-1 visa include ministers on evangelical tours; members of boards of directors of U.S. corporations; employees of foreign airlines not eligible for E visa classification; personal or domestic servants of H-1 and L-1 non-immigrant employers and of U.S. citizens residing abroad or temporarily assigned to the U.S.; certain professional athletes; investors seeking investment in the U.S.; certain commercial truck drivers; and, in the building or construction industry, applicants coming to the U.S. to supervise or train other workers engaged construction work.  Generally, under NAFTA, Canadians may enter the U.S., as B-1 or B-2 visitors  without  visas,  however,  the  underlying  requirements  of  this  status,  such  as  the requirement of non-immigrant intent and limitations on stay as well as permissible activities within the U.S., remain constant.

The Visa Waiver Program provides an exception from the Immigration and Nationality Act’s prohibition of admission into the U.S. of a foreign national not in possession of a valid visa.  This program authorizes the U.S. Attorney General, in consultation with the U.S. Secretary of State, to waive the requirement of a valid non-immigrant visa for business or pleasure visitors who are seeking to enter the U.S. for no more than 90 days.  As of January 12, 2009, a valid ESTA approval is required for all Visa Waiver Program (VWP) to travel to the United States. The Department of Homeland Security, Electronic System for Travel Authorization (ESTA) is a free, automated system used to determine the eligibility of visitors to travel to the United States under the VWP.  It collects the same information as the paper I-94W form that VWP travelers fill out en route to the United States.  ESTA applications may be submitted at any time prior to travel.  An ESTA authorization generally will be valid for up to two years. Authorizations will be
valid for multiple entries into the United States. 35 countries are now eligible under the Visa Waiver Program.

They are: Andorra, Australia, Austria, Belgium, Brunei, Denmark, Estonia, Finland, France, Germany, Hungary, Iceland, Ireland, Italy, Japan, Liechtenstein, Lithuania, Luxembourg,  Monaco,  New  Zealand,  the  Netherlands,  Norway,  Portugal,  San  Marino, Singapore, Slovakia, Slovenia, South Korea, Spain, Sweden, Switzerland, and the United Kingdom. This program also allows temporary business and pleasure stays in the U.S for up to 90 days, again, as discussed above regarding the B-1/B-2 visas, to engage in commercial transactions that do not engage gainful employment in the U.S. or for pleasure.  However, perhaps unknowingly, many important rights are waived by these individuals, such as the right to a hearing on admission and extensions, applications for changes of stays, and applications for adjustment of status (to another non-immigrant or even immigrant status) with the exception of “immediate relatives.”  Nonetheless, the Visa Waiver Program is beneficial to applicants because it avoids advance visa screening and possible visa issuance delays.

An H-1B visa may be issued for an initial period of three years, with extensions possible for  up  to six years, (sometimes longer when applications for permanent business-related residency  are  pending)  for  specialty  occupations  when  the  foreign national (a.k.a., the “beneficiary”) meets the requirements of the specialty occupation. 3 This is the visa category which has been the most modified by legislation and, what was once a simple matter, has become a complex, competitive process whereby qualified foreign nationals are competing for 65,000 visas issued under this year’s quota, a quota which has been oversubscribed and miscounted.  The filing process involves three steps: 1) Filing an application with the local office of the Department of Labor to determine the prevailing wage, 2) Filing a labor condition attestation (Form ETA 9035) with the local office of the Department of Labor, which certifies that the salary offered is within the prevailing wage, and 3) Filing the application with the Bureau of Citizenship and Immigration Services, using Form I-129 H, a form which has recently been modified and allows online, ”E-Filing.”  Processing time for this classification may take as long as 6 months, unless Premium Processing (Form I-907) is requested—whereby an applicant pays an extra $1,000—for a 15-day, expedited processing time.

H-1B status differs from B-1/B-2 visas and the Visa Waiver Program in that it does not require maintenance of a foreign residence; a corporation may petition for its owner under this category; the employer must maintain records open for inspection, and agree to pay an employee reasonable costs of transportation home if that employee is terminated by the employer. The employer must begin paying the approved prevailing wage or better within 30 days of entry into the U.S. or within 60 days from the filing of the change of status application for an alien whose filing was made in the U.S.   The position itself must be permanent.  Some examples of approvable  H-1B  petitions  include  those  for  Accountants,  Financial  Analysts,  Architects, Engineers, Systems Analysts, Market Research Analysts, and Business Analysts, in contrast with petitions for Managers and Secretaries.

Some exceptions and special legislation exist for citizens of Singapore, Chile, and Australia; however, these are not addressed in this article.

Intracompany  transferee  visa  status  may  be  granted  for  executives,  managers  and specialized knowledge employees of foreign companies having related companies in the U.S. Under Section 101 (a) (15) (L) of the Immigration and Nationality Act, an alien—who, within the preceding three years, has been employed abroad for one continuous year by a qualifying organization—may be admitted temporarily to the U.S. to be employed by a parent, branch, affiliate, or subsidiary of that employer in a managerial or executive capacity, or in a position requiring specialized knowledge. When applying under this category, the foreign Beneficiary is
not necessarily required to posses baccalaureate degree or its U.S. equivalent, and the salary requirements are flexible as long as the petitioning U.S. company is a qualifying organization and the beneficiary can demonstrate employment abroad with the qualifying organization for one continuous year in the preceding three years.

Managers and executives of qualifying organizations may be transferred to the U.S. under the L-1A category, and specialized individuals possessing a bachelor’s degree or a U.S. equivalent may be transferred under the L-1B category.  However, a recent amendment to the regulations was made under the L-1 Visa Reform Act of 2004, requiring that an alien—who will serve in a capacity involving specialized knowledge with respect to an employer for purposes of section 101(a)(15)(L) and will be stationed primarily at the worksite of an employer other than the  petitioning  employer  or  its  affiliate,  subsidiary,  or  parent—will  not  be  eligible  for classification  under  section 101(a)(15)(L)  if  the  alien  will  be  controlled  and  supervised principally by such unaffiliated employer; or the placement of the alien at the worksite of the unaffiliated employer is essentially an arrangement to provide labor for hire for the unaffiliated employer, rather than a placement in connection with the provision of a product or service for which specialized knowledge specific to the petitioning employer is necessary.

The L-1A intracompany transferee visa is an attractive option for foreign nationals wishing to establish permanent residence in the U.S., as it allows them an opportunity to enter the U.S. and open a new office, and then after a year, if the business is successful, it would allow them to apply for multinational executive classification leading to residence, or the “green card,” through the business, without filing an alien labor certification to prove that no U.S. workers are available.

Other useful non-immigrant visas include the T/N Status for Mexican and Canadian nationals, limited to 63 listed professions; the E-1/E-2 Treaty Trader/Investor Visas, which require a treaty of commerce and navigation between the U.S. and the country of the applicant’s nationality and a substantial investment in a U.S. enterprise; the student visa category, which like the B-1/B-2 tourist visas, require a foreign residence and ties to that residence (F-1 or M-1); the outstanding alien and performer visas (O and P visas, respectively); and the exchange visitor (J-1).  The Immigration and Nationality Act, Code of Federal Regulations, and the Foreign Affairs Manual and the government websites such as uscis.gov (Bureau of Citizenship and Immigration Services) should be consulted for the most up-to-date information in this constantly changing area of law.